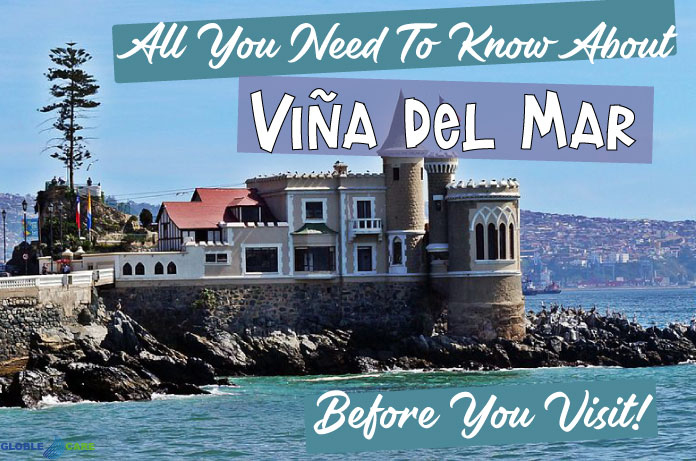 When we think of Vina del Mar, the first thing that comes to mind is a land full of flowers, beaches, seafood, and some quirky streets. Three hundred fifty thousand people are living in this city on Chile’s Pacific coast:

Take a stroll through its neighborhoods and admire its manicured gardens.

Whether you prefer black, white, or golden beaches, enjoy a day in the sun. You can enjoy white wine from the Casablanca Valley with the fresh fish you caught. As

You watch the waves crash below under the glass floor of the castle; you’ll be mesmerized.

Party until dawn by going to a club. You can move at your own pace in Vina del Mar, so go as fast or slow as you like.

In the territory where Viña del Mar stands today, the changos, who once dominated the lands, were the first settlers. They were primarily fishermen and collectors who lived in this area until the arrival of the Spanish.

Today, a city is known as Viña del Mar was formed out of two large estates in the region: Las Siete Hermanas and La Vina del Mar, separated by the Marga Marga Marshlands, which today cross the city center. Francisco Álvarez purchased both estates in 1840. Until 1874, his granddaughter, the only heir to the estate, married engineer José Francisco Vergara Echevers. The following December, he presented a proposal to turn Vina del Mar into a city. Due to the settlement of industries and modernity in Viña del Mar, this city has grown rapidly.

From the late 19th century to the early 20th century, its beaches gradually transformed into high-socio-economic bathing resorts.

Several years passed, and the population grew. Finally, in the 1930s, the entire center of the city was covered with buildings. Large mansions, castles, towers, and residences of remarkable architectural style were erected in this place.

The settling of private universities and the expansion of public universities led to new colleges in 1980. Thus, the city acquired the atmosphere of a university campus.

Later, a new neighborhood emerged in the city’s northern sector, known as the Reñaca Marshland, which enjoyed booming growth during 1990. It became a high-class neighborhood.

The glamorous jet-set and national elite flock to Vina del Mar to enjoy an unsurpassed tourism experience. This annual event attracts people from all over the world, among other significant events.

HOW TO GREET AROUND THE GLOBE

The tranquil botanical gardens of Chile were initially commissioned by a prosperous Chilean saltpeter manufacturer in the 1930s. There are many ways to walk through the park, making for a pleasant afternoon stroll with its yellow and red foliage, particularly autumn. Among the 3,000-plus plant species that are on display, Chilean cacti are the most treasured.

Viña’s premier green space is lusciously green and immaculately manicured. A Portuguese businessman, a wealthy Christian from Valparaiso, first acquired the estate as his private residence in the 1840s. Her sailor son brought exotic plants from faraway lands, while her gardening-obsessed wife developed this lot into the city’s most beautiful park. Currently, the majestic palace is home to that fine art museum and an amphitheater where the famous Vina del Mar International Song Festival is held.

It is a great place to have fun on the city beach of Playa Reñaca. The parties, crowds, and fun activities are all wonderful at this festival. Long Beach in Chile is a popular tourist spot and a stretch of golden sand that indeed lives up to its other name. There are six sectors of the beach, all with soft sand and warm waters.

Apartment buildings and other buildings make up the hillside that surrounds the beach. Besides market stalls and shops, the promenade is also bustling with ice cream shops. Additionally, there is a wide selection of cafes here, and it is a popular destination. You can enjoy this popular spot if you enjoy crowds, making it a great place to watch people.

Chile is a destination where the impossible becomes possible. The Rapa Nui National Park, with its mythical Moai, mysterious statues filled with interesting facts and curiosities, is one of its most spectacular places.

Rapa Nui National Park is one of the most remote islands in the world. In 1995, the United Nations declared Moai a World Heritage Site because they preserve primitive Polynesian culture.

These monolithic statues have become the island’s most attractive and essential tourist attraction as masterpieces of humankind.

A stone castle built on the Pacific Ocean coast, Wulff Castle combines striking architecture with scenic surroundings. A German businessman named Gustav Adolfo Wulff Mowte was responsible for the construction of the castle in 1906. As a result of Wulff’s death, the castle has been home to several institutions, including a maritime museum, a library museum, and a museum of sea culture, in addition to municipal offices; today, it is a national historical monument. The backdrop of the coast provides an excellent location for coastal photographs, which attracts many visitors to the site.