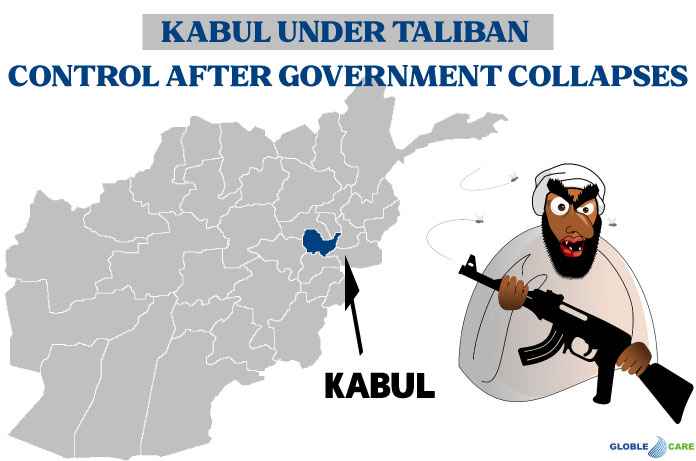 To the west lies Iran, and to the east, Pakistan; Afghanistan is in Central Asia. The country’s official name is the Islamic Republic of Afghanistan, with Kabul as its capital. There are many ethnic groups in the country. For example, 15 million Pashtuns live in Kandahar, which is in the south of Afghanistan. The people in the country are descendants of people who arrived 3,200 years ago.

A new era of unrest in Afghanistan has begun after the government of Ashraf Ghani collapsed Sunday night, and Taliban fighters have taken control of Kabul’s presidential palace. Many Afghans are afraid for their lives and freedom as a result.

While the Taliban have seized power in Kabul and other key cities for weeks, it happened much sooner than most expected-after two decades of U.S. war-making and nation-building in the country, trillions of dollars of aid, and the loss of tens of thousands of lives.

Women remained indoors in the capital, concerned about the rules that will be implemented under Taliban rule. In addition, government employees faced retribution from the insurgents on a large scale.

Throughout this article, we explain the history of Afghanistan and the restrictions it entails on the people who live there.

Afghanistan was a divided place in the 1970s when two significant powers fought for influence. First, there was a battle for control of Afghanistan between the United States and the Soviet Union. Second, the two countries invested a great deal in Afghanistan, hoping to gain the government’s backing.

But in 1978, a communist group seized control and renamed Afghanistan the Democratic Republic of Afghanistan.

Although the United States was unhappy, the Soviet Union was very pleased as they were also communist countries.

Afghanistan’s communist government rejected Islam as its principal religion, which was very unpopular. As a result, many people were very unhappy and revolted against the new government.

The country was at war for ten years. Due to the violence, millions of Afghanistanis have fled the country, becoming refugees.

As an anti-communist rebellion grew, the United States of America gave many weapons and money to Muslim groups sympathetic to the cause. As a result, in addition to Afghans, fighters from around the globe came to Afghanistan to join the Soviet Union in the war.

Ultimately, the Soviet Union withdrew its troops from Afghanistan in 1989, and the communist government in Afghanistan was overthrown in 1992.

Now it was known as the Islamic State of Afghanistan.

Despite all this, the Afghans were still highly divided, and the rebels who took over the country had very different ideas for how it should be governed.

Despite this, Afghanistan is still at war within itself.

A group of students in Afghanistan thought they knew exactly how the country of Afghanistan should be run. So they were called the Taliban, which means ‘student’ in Pashto.

They wanted to make Afghanistan a safer place and to put an end to corruption and illegal activity. This made them very popular, and they grew in power.

And unlike the communist government that came before them, they were a very religious group – and believed in a particular way of practicing Islam.

But they also had some extreme views about what a lawful, Islamic country should look like.

For example, they believed that girls older than ten should not be educated, and a burka should cover women outside their homes.

In 1996 the Taliban took over the capital city, Kabul. Life became very controlled.

Taliban cooperation did not help end communism in Afghanistan, however. In the 1980s, al-Qaeda fought against communist rule.

It hated the United States and any other country outside of Islam, such as Afghanistan. Islam made them feel like they were fighting a ‘holy war’.

Bin Laden, the leader of Al Qaeda, served as the organization’s leader. He wanted to make the holy war for Islam more prominent. So he tried to take the war outside Afghanistan.

Four hijacked planes hit two New York buildings and a federal building in Washington in 2001. The collapse of these buildings in New York led to the deaths of thousands of people.

The war ended Taliban rule, but not much else was accomplished for Afganistan.

Read Also: Top 8 Weirdest and Strangest Plants on The Earth

Since their invasion of Afghanistan in 2001, the United States and the United Kingdom have remained in the country.

The new government was backed by the U.S. in 2002. They returned to fight, determined to defeat foreign forces.

However, despite the presence of US and UK soldiers, the Taliban still managed to maintain control over parts of Afghanistan.

As of September 20, 2021, all US troops will withdraw from Afghanistan under the order of President Biden. It was hoped that 20 years after the attacks on New York and Washington, the Afghan Government could keep control of the country on its own.

The Taliban may become more powerful, but some people worried that this would lead to their control.

During the US withdrawal from Kabul, the Taliban again seized control of the city and the presidential palace.

There was already a flight of the president of Afghanistan.

Afghanistan seems to have been retaken by Taliban again, but a new Taliban regime isn’t yet known.